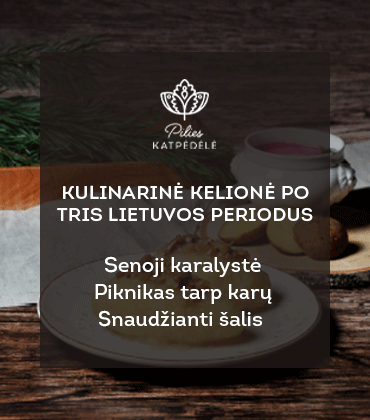 The Ancient Kingdom – dishes dominant in Lithuania in the early 19th – first half of the 20th centuries, when people were doing hard farming on the holdings. Substantial and delicious dishes of those times, especially potato dishes, are still very popular and favoured by Lithuanians.

Inter-War Picnic - In the first half of the 20th century, particularly from 1918 to 1940, Lithuanian cuisine, like the then Independent Republic of Lithuania, was very open to the world and getting back to the old Lithuanian noblemen food traditions. Recipes of culinary masterpieces of those times were and still are handed down from generation to generation as a great value.

The Slumber Land – the middle and second half of the 20th century. The saddest period of Lithuania’s history, when Lithuanian people started enjoying the gastronomic prides of other countries (particularly of the former USSR), learned how to cook them and even improved their recipes.

Today, all this represents the classics of the Lithuanian cuisine. Having not tasted it, you can’t say you know Lithuania.